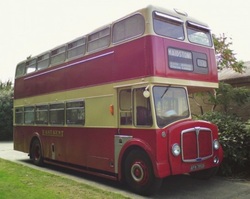 AEC REGENT  V
1964
AFN 780 B was delivered to 'East Kent' new in 1964 and was fitted with the new style fluorescent lighting. This Regent was also originally fitted with a nearside luggage pen in the lower saloon which had since been replaced with a standard double seat.
As of late 2020 the nearside front seat has once again been replace by an original Ashford Town service luggage pen. This along with the correct destination blinds now helps to restore '780B' back to her early Ashford days in service. 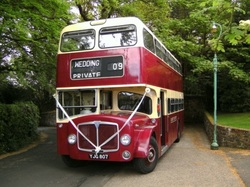 AEC Bridgemaster 590
1962
YJG 807 is the sole survivor of three Bridgemasters delivered to the 'East Kent' Dover depot in 1962 to be operated on the Town service 129 to St. Radigan's.  This ran via a low railway bridge in Coombe Valley Road which is no longer accessible by double deck buses due to bridge damage protection measures. '807' was delivered with and still has an offside illuminated advertisement display. Now complete with a full set of new tyres '807' is back on the road once more. 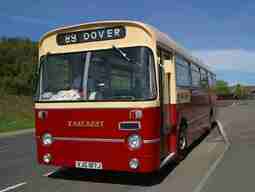 AEC Swift 691
​1970
VJG 187J returned to the arms of Friends of the East Kent during September 2020. Sold by FotEK several years ago to ease financial difficulties the East Kent Nostalgic Bus & Coach Trust used it as a publicity vehicle for a couple of years before letting her  sit in a field for several years. February 2020 saw it on e-bay and was bought by Dave Mulpeter of 'Seaford and District' who planned to restore her to full class 6 PSV.
Due to the Covid lockdown Dave decided to sell her. She was quickly bought back to Kent and is now garaged alongside the two vehicles above.